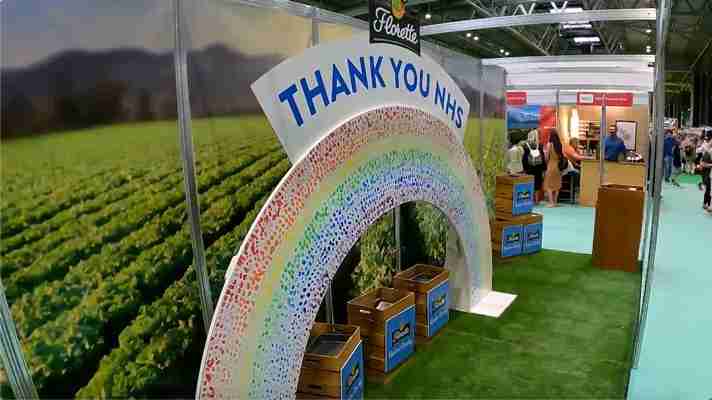 More than 6,000 Florette fans at this year’s BBC Good Food Show have helped to create a 14ft (4.3m) wide rainbow honouring the NHS. It was created by visitors to the Florette stand at the show, with each person picking a rainbow colour and then adding their own thumbprint to the design, as captured on a special time-lapse video that shows the rainbow taking shape.

Support from all ages

Children as young as two and adults in their eighties placed their thumb onto the rainbow arch to show their support for emergency services across the country.

Florette commissioned the mural as a permanent tribute to the NHS, social care, and frontline services for their hard work throughout the pandemic and beyond.

The unveiling was attended by Margaret Kennan, the first person in the world to receive the Pfizer Covid-19 vaccine.

The 92-year-old received the vaccine at the hospital and returned to add the final thumbprint to the mural alongside Matron May Parsons, who administered Margaret’s first jab in December 2020.

The event was also attended by the Lord Mayor of Coventry, Cllr Maton, who gave his own ‘thumbs up’ to the rainbow mural.

The mural will now be on permanent display as a tribute to the hard work of NHS, social care, and frontline services throughout the pandemic and beyond.

Florette provided a healthy lunch to over 500 onsite staff with goody bags and vouchers to redeem for a pack of Florette’s Rainbow Crunchy salad, which launched last year and donates 2p from every pack sold to NHS Charities Together.

“A huge thank you”

Nick White, Florette’s Head of Marketing said: “Through our ongoing support of NHS Charities Together, with Florette Rainbow Crunchy we are proud to once again be supporting our frontline heroes. The rainbow mural, created alongside members of the public, is our way of showcasing our ongoing appreciation and respect for the heroism and dedication of our key workers. It is our way of saying a huge thank you to all.”

You can find out more about which cookies we are using or switch them off in settings.

This website uses cookies so that we can provide you with the best user experience possible. Cookie information is stored in your browser and performs functions such as recognising you when you return to our website and helping our team to understand which sections of the website you find most interesting and useful.

Strictly Necessary Cookie should be enabled at all times so that we can save your preferences for cookie settings.

If you disable this cookie, we will not be able to save your preferences. This means that every time you visit this website you will need to enable or disable cookies again.

This website uses Google Analytics to collect anonymous information such as the number of visitors to the site, and the most popular pages.

Please enable Strictly Necessary Cookies first so that we can save your preferences!